Experience all of Pearl Harbor on this comprehensive WWII Heroes Adventure Tour, with entry to every memorial and museum in the precinct. 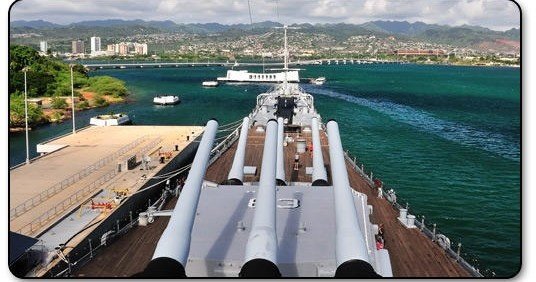 Experience all of Pearl Harbor on this comprehensive WWII Heroes Adventure Tour. Visit the USS Arizona Memorial, Pearl Harbor Visitor Center and theUSS Bowfin Submarine. Then cross the bridge to Ford Island to board the Battleship Missouri and walk the historic decks and see the battle scars in the hangars and award-winning exhibits at the Pearl Harbor Aviation Museum.

Pearl Harbor Visitor Center is where you’ll watch actual film footage of the attack, view historic displays, and gain firsthand insight into WWII in the Pacific and beyond. In addition, you’ll see several galleries displaying artifacts, photos, and dramatic evidence of the surprise attack.

Then, the USS Arizona Memorial is located directly above the USS Arizona battleship that was sunk during the attack on December 7, 1941. The ship is the final resting place of many of the 1,177 officers and crewmen who were lost and a powerful reminder of those who gave their lives for their country.

The USS Bowfin Submarine, also known as the “Pearl Harbor Avenger”, played an epic role in the battles of the Pacific. You’ll walk through the remarkable vessel docked in the harbour and enjoy an included audio tour.

Onboard the USS Missouri Battleship, you’ll walk in the footprints of General Douglas MacArthur, Admiral Chester Nimitz, and officers of the Allied Powers in 1945 when the instruments of surrender were signed on the ship, signalling the end of WWII. “Mighty Mo” fought in WWII, the Korean War, and in Desert Storm in the Persian Gulf, supporting the cause of freedom.

Finally, the Pearl Harbor Aviation Museum, located in two WWII hangars and retaining bullet holes from the December 7, 1941 attack, spans 105,000 square feet. An impressive array of wartime aircraft is displayed, including an authentic Japanese Zero, the type used in the attack.

Lunch is not included but is available at a selection of venues on your own.

Don't have all day? Check out our half day tour that explores Arizona Memorial, Pearl Harbor, and Honolulu city highlights for a third of the price!

What can I bring?

What is not allowed?

Are there storage lockers?

The novel coronavirus, COVID-19, has been declared a worldwide pandemic by the World Health Organization. COVID-19 is reported to be contagious. The state of medical knowledge is evolving, but the virus is believed to spread from person-to-person contact and possibly by contact with contaminated surfaces and objects or in the air. People reportedly can be infected and show no symptoms and therefore spread the disease. The exact methods of spread and contraction are unknown, and there is no known treatment, cure, or vaccine for COVID-19. Evidence has shown that COVID-19 can cause serious and potentially life-threatening illness and even death.

The Operator cannot prevent you [or your child(ren)] from becoming exposed to, contracting, or spreading COVID-19 while utilizing its services or premises. It is not possible to prevent against the presence of the disease. Therefore, if you choose to utilize The Operator's services and/or enter onto The Operator's premises you may be exposing yourself to and/or increasing your risk of contracting or spreading COVID-19.