Watch a Mexican wrestling match and have a night out at local cantinas! 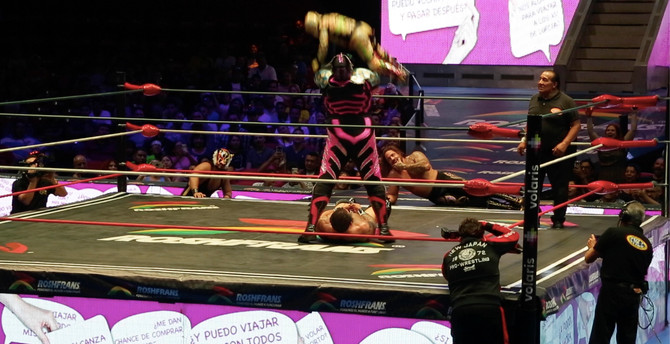 3. Witness the spectacle in premium seats

4. Walk towards a cantina

5. Drinks at a traditional cantina

Lucha Libre, which literally translates to 'free fighting', is an essential part of modern Mexican culture and a favourite pastime. Experience the passion of the arena and see how locals enjoy this traditional spectacle. This match features acrobatics, rehearsed tricks, costume changes and colourful masks, keeping the luchadores identity a secret.

The rules of Lucha Libre resemble American wrestling where the luchador (fighter) has to pin down his opponent for three seconds over the course of three rounds, usually, the fights involve the técnicos (good guys) wrestling against the rudos (bad guys). You'll also see female wrestlers known as luchadoras, male wrestlers dressed in drag called éxoticos and los minis, the dwarves fighters.

End the night going into a classic saloon. Grab drinks and listen to traditional music in a fascinating urban scenario.

Can I get a private hotel pick up/ drop off?

Yes, you can add private transportation service with pick up and drop off. The price depends on the locations you choose (around 25$ USD).

Please let us know in advance if you require this service.

What is the max number of people on this tour?

In order to keep the personalized experience maximum number of people is 6 per experience. If you have a bigger group or family let us know on your reservation and we’ll organize a perfect experience for the amount of people requested.

Is there an age restriction?

There is no age restriction. Just make sure children or elders are up to the itineraries.